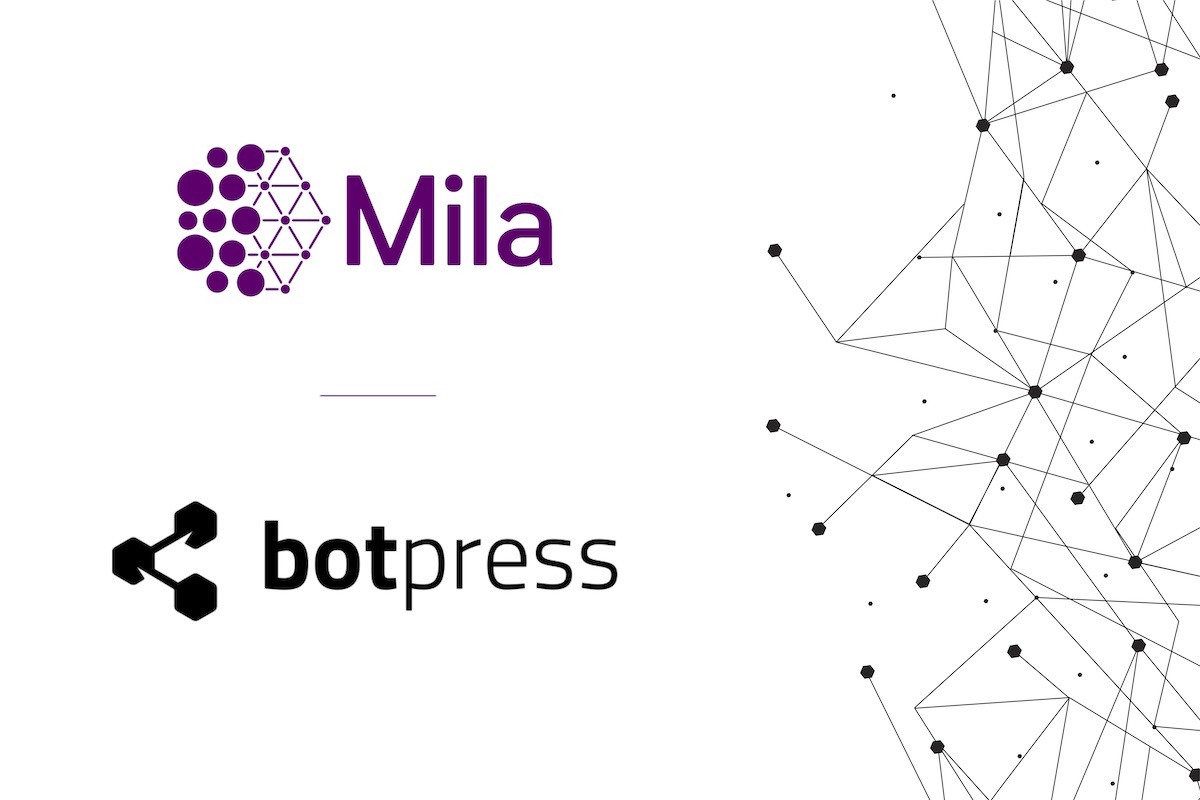 QUEBEC CITY, June 29, 2021 – Mila, the Montreal-based Quebec artificial intelligence institute, is proud to announce that it has signed a partnership with Botpress to accelerate and refine its artificial intelligence technology innovations. Botpress distributes natural language processing technology to enable software developers to build conversational assistants for businesses and governments. The announcement comes shortly after Botpress closed a $15M round of financing that will allow them to expand their team of software developers from 25 to 70 people in the coming months.

“We are very excited about the partnership with Mila. It gives us access to a world-class research community to continue learning and collaborating on natural language processing research projects,” said Sylvain Perron, CEO of Botpress. “Conversations have the potential to be the biggest innovation in terms of user interface since graphical user interfaces were invented. For this to happen, artificial intelligence must continue to progress and it is organizations like Mila that are contributing to this rapid progression of technology,” he added.

Among the notable concrete applications of this technology is the Quebec Government’s virtual assistant available on the Quebec.ca website–an assistant that was launched in the midst of the pandemic to allow citizens to access new information issued by the government every day. It is Botpress’ technology that powers this assistant, which at times can interact with nearly 30,000 people in a single day.

“We are happy to welcome Botpress as a partner in our large community. Natural language processing is one of the most promising fields of research. Our experts and researchers are among the best in the world in the field and we are happy to be able to collaborate with Botpress in order to pool our thoughts to take this technology even further,” said Yoshua Bengio, Mila’s Founder and Scientific Director, as well as Full Professor at Université de Montréal.

About Mila
Founded by Professor Yoshua Bengio of the University of Montreal, Mila is an artificial intelligence research institute that brings together over 700 researchers specializing in machine learning and deep learning. Based in Montreal, Mila’s mission is to be a global hub for scientific advances that inspire innovation and development of AI for the benefit of all. Mila is a non-profit organization recognized worldwide for its significant contributions to the field of deep learning, particularly in language modeling, machine translation, object recognition, and generative models. For more information, visit mila.quebec.

About Botpress
Botpress is an open source software for developers to build high quality conversational assistants. Botpress is used by more than 100,000 developers worldwide and more than 1000 companies use its technology. Among Botpress’ most notable customers are the Government of Quebec, Windstream, the Canadian Armed Forces, VR Bank, Husqvarna, the City of Paris, and many others. Botpress’ mission is to build the technological infrastructure that powers conversational assistants. Visit Botpress.com for more information.